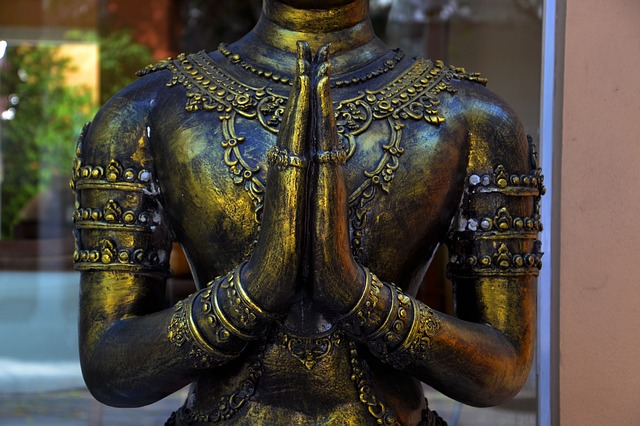 Sometimes, the most simple things in yoga never get explained or are explained incompletely by those who poorly understand them. A familiar mudra or hand pose you’ve probably done a hundred times (especially if you grew up in a religious household) in yoga classes is “prayer pose”, or anjali mudra (prana mudra in kundalini yoga). It is traditionally known worldwide as a gesture of turning inward or of expressing goodwill and peace.

But yoga is not a religion; it’s a science. Do you know the scientific significance of prayer hands? There are several facets of this special mudra worth understanding.

First let’s consider the meanings. A mudra is a “seal” and “anjali” could be translated as “an honoring”. By forming our hands this way, we assume an attitude of reverence. It’s considered a daily greeting gesture of respect in Easter traditions. You are most likely familiar with “Namaste” which literally means, “I salute you,” but is often translated to mean, “The light in me honors the light in you.” Used in the traditional way, it is a greeting and not a parting. However, it is often seen used as a closing in yoga classes. Perhaps the intention is the most important aspect of its meaning.

Now on to the science. The hands and fingers are filled with sensitive nerve receptors. These nerves are intelligent enough to help you know when something is hot, cold, soft, prickly, etc. and they communicate that information to the brain’s cerebral cortex.

Now, as you probably know, your brain has two halves: the right brain is our creative and intuitive hemisphere while the left is our analytic and logical side. When we bring our hands together, the right being controlled by the left brain and the left by the right, we are in essence, integrating brain function, bringing balance between left and right. Dominant brain halves are thus neutralized bringing improved concentration and focus.

But wait. There’s more. The right side of the body represents the sun and masculine energy (pingala) while the left side represents the feminine and moon (ida). When we bring the hands together in prayer pose, we are balancing these polar energies as well, creating a neutral space in the body’s electromagnetic field.

I want to briefly mention the thumbs and the significance of pressing them into the breastbone. This activates a reflex point of the vagus nerve, which is one of the longest nerves in the body traveling from the head, ears, through the neck, linking our heart, lungs and abdomen.

The vagus nerve is associated with both our ability to rest, relax and regenerate and with our often overused habits of shutting down, running away, and disconnecting when we sense a threat. The vagas nerve helps to regulate our breathing, the body’s antinflammatory response, and heartrate. It also affects our memory and ability to tap into our “gut” sense. Research has shown that stimulation of the ventral vagal nerve, along the front body, activates these feelings of safety and calm, so crucial to yoga practice. So, when we press into the sternum with our thumbs, we are activating the ventral vagal nerve and its positive aspects.

So maybe why we perform Anjali Mudra is beginning to make a lot more sense to you. But in addition to the linguistic meanings and science behind Anjali, there is of course, the spiritual implication best described by Krishnamacharya, well-known yoga teacher and scholar (1880-1989), who wrote:

This gesture signifies the potential for an intention to progress to the greatest spiritual awakening. When done properly the palms are not flat against each other; the knuckles at the base of the fingers are bent a little, creating space between the palms and fingers of the two hands resembling a flower yet to open, symbolizing the opening of our hearts.

In summary, Anjali mudra aligns us with the right attitude to center ourselves and pray. It inspires our posture upward, and it also brings calm to the emotional body and mind, balance to the brain, and opens the heart. Furthermore, it signifies our spiritual aspiration and prepares us to receive spiritual awakening. So next time you find yourself in yoga class placing your hands together in prayer, may you have an enriched experience by recalling some of what’s behind it.

Yoga Beyond the Fluff: The Power of Prayer Hands